Time, Sight, Sounds and a Virus 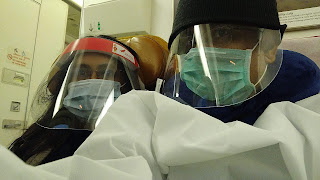 Students engaged me on the weekend to prepare for a session. They were in small group activities. A student in a small group did not sign on. Classmates explained the absence. COVID-19. All in the student’s family tested positive. It felt like the virus jolted me through the Wi-Fi signal. As if, the vicarious became the visceral. The classmates camaraderie assured me that their colleague was up until 2 am working with them on their group’s activities. Recovery was imminent, they said. The trends of the day did not allow me to withhold a recent desire. This episode, like a trigger quickened the birthing of this note from its embryo.

Just the week before one of the two ladies who attend to our needs at home pleaded unusually for funds for a 7 years old girl in her extended family. Blood cancer. After seeing signs of recovery from a cancer center nearer her coastal town, the girl’s parents decided to admit her to a distant hospital whose national fame lay in their claim to dedicated and ethical medical professionals. That’s because the red liquid was now exiting the child’s nostrils, long after the chemotherapy she underwent. The fisherman’s daughter braving her singularity had her parents flummoxed. How did their youngest and the third child have to endure the illness before she could even flower into personhood from her tender age?

We pledged to support the little one, especially because the lady working at our home was herself in dire straits. The pandemic had already taken away her man’s job. Their misery was just compounded further in the pandemic. Memories of the hazmat suits in their neighboring graveyard burying a patient of the virus haunted their own fates.

The week before this, the other lady who worked about our home had her daughter call us up to take a day off. Her daughter sent us pictures of her 17 years old brother. He lay with a stab wound, hand wrapped around his head in pain. After initial stitches, the boy was to be taken to a diagnostic center for a scan of the abdomen to investigate if the wound went any deeper. Or graver.

The mother reported diligently the day after the scan, and narrated this story. She gave the boy Rs. 100/- to get himself a pandemic-delayed haircut. She sent him along with her 16 years old nephew. The roadside salon was just 12 minutes away on foot. Four youth halted them mid-way and one of them who mobbed the duo pierced through the boy’s wind-cheater and seared the abdomen. Another took the Rs.100/- while the boy’s cousin crumbled with the brutes' force to the roadside. A vehicle was in waiting, and the four youth that attacked escaped into obscurity on its wheels. The poor victims described the youth as migrant labor speaking a tongue other than their own.

The young girl has been given little hope by oncologists of repute. Even if the family were to raise funds for Rs.30 lakhs, there would be no guarantee of cure. The young boy is now out of danger, hair grown just a little longer. The young girl’s parents have decided to call off the fund raising. They will return home via road, after a visit to a shrine for prayers enroute. Palliative care will resign the young one to the dust from which stars are made. A matter of time. When, not if.

The young boy who has no access to online schooling will wonder of ways to be useful to a family already staring at poverty. What if the pandemic had not struck? What if his hair had not grown at all? Can time not spare such in mercy?

There was another student online today, from another town, whose brother and family tested positive, and despite symptoms reported to the session with a COVID negative test outcome. This pandemic has made scarce resources even scarcer. It has made such stories go underground to make way for shriller noise. Desperate news anchors gloss over daily deaths in the thousands. Facts are replaced with opinions. Monetized opinions masquerade as truth. People pay for the irrelevant, as if they need the shot from the airwaves to numb them from reality.

Data crunchers openly doubt the data collection on the pandemic now. The reality we do not pay for!

Who is to say, which of these statistics – faceless and dire as they are – reach dashboards that can be relied on to work for us as society? The Serum Institute's heir sounded of another alarm for Indians. Will the government be able to pay Rs.80,000 crore to vaccinate India?

Just a fortnight ago, government doctors in Karnataka were not cooperating with data sharing for being treated unfairly by their masters. Just last week, private hospitals in Bengaluru, were reported to have treated their own medical staff for the virus with no assistance from their government.

How may voices as these overcome the din of clanging plates to be recognized for what they are? We will as a society need to offer a second history to the aggrieved.  As prisoners of sound, the silence will deafen even the wafts of dolor yearning to caress the strings that echo into the wells of despair in our hearts. Blinded by light, pretending to be messianic, virtual media fumble with accessibility options. The gifted in eyesight pan screens that take them to deceits of fantasy and untruth.

The eyes that see cannot yet see the eyes from which they see.