Media's Era and a few challenges

Noam Chomsky’s most choice critique of the US presidential process in 2016 is the lack of effective priorities. Two stand out for him – global warming and nuclear arms. What is it about us as a species that eclipses what is important from what titillates or provides false cover for our realities? Perhaps it is the way content is pushed over electronic media.

Ashis Nandy may be considered as a well referred curator of India’s social dynamics. He responds to a question in a recent interview thus : “All developing societies, including China, have now acc­epted that they are backward. Our future is exactly the same as the future of all standardised nation-states. It is a new vision for them as well, except that their vision is 300 years old. We have now joined the bandwagon. India, therefore, doesn’t have a distinctive future.”

Such is the conditioning that can occur over decades of patterned information processing. However, evenso, cracks in patterns provide us clues to what we may have been or might choose to become. I spotted at least two recently.

One was from Singapore’s ChannelNews Asia, that featured King Thibaw’s exile in 1885. Few would even link the histories between India and Myanmar in this manner, leave alone that between Buddhism and it’s spread from India. That the documentary could access through dogged enquiry living progeny of the characters from history is testimony to human investment in curiosity. As someone living in India, it astonished me to know that such a forlorn promontory lay unsung and neglected atop a Ratnagiri mound, as if the occurrence were unremarkable. British manipulation during their colonial period may perhaps have even more evidence than this documentary contained.

It is the contemporary somnambulance of 'free' India, that strikes me even more. Free from the British, but enslaved to economic paradigms indeed. To be sure, I revisited the Singapore based Channel to check if that quality and character for codification of cultural heritage were mere happenstance. Lo and behold, I find a spirited journalist exploring Sikhism’s influence through Amritsar’s history, in a variation of documentary style. Such consistency in curation on a news channel is surely a credit worthy feature. I have yet to see contemporary depictions of India made in India. So perhaps, my eyes and senses mediated through them are prejudiced through Singaporean newsbytes. After all, the template of governance in Singapore is exactly the substance and forerunner of Ashis Nandy’s ‘standardized nation-state’.

TV5 Monde is a French channel I peruse to ensure my knowledge of the French language does not rust. From its culinary shows, quiz formats, brilliant movies to its quaintly depictions of French territories like Guadeloupe, it represents a cultivated aesthetic, specific to its culture. However, it’s contemporariness was what caught me in it’s embrace of the global warming theme. What would a Frenchman do in the land of erstwhile British prisoners? That’s right, French investigators setting up equipment to scale the height of the slow growing high quality logwoods have a lot to do with the clash between climate, ecology and human economic activity. French polyvalence and multi-dimensionality comes through in this feature. It depicts generations of Tasmanian inhabitants, as well as lumberjack technology evolution.

While on the one hand, the camera accompanies scientists from Hobart's university studying surviving birds species like the swift parrot, it reminds us that the Tasmanian devil lost its place in mainland Australia. Similarly, it reminds us of the extinction of marsupials like the Thylacine. It’s realistic depiction of ‘corporatization’ of forest wealth shines through, in the otherwise templated beauty of Australia’s untamed nature. 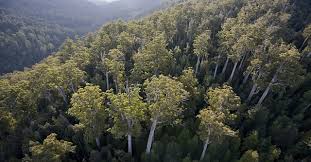 While the documentary accommodates space for the social evil of lobbying in parliamentary systems, (with no less than the Australian Prime Minister saying that conservation had gone too far) it amplifies the maxim, that the map is not the territory. It’s sober reminder comes from depicting art in a fitting tribute on sculptor Greg Duncan’s 100 meter wall. UNESCO got into the picture lately, and declared acres under a sanctuary, where no human should enter. Through lives of lumbermen, the documentary however, makes it clear that even well intended global compacts like the UNESCO may get the picture wrong, and that it is the intersection between humans and forest systems that needs intervention.

Posted by Joseph George A at 5:06 PM No comments: