I caught up with old friends, made new connections and renewed a few relationships over the last 48 hours. Here's a distilled memory from those interactions.

Some quick lessons over 48 hours.

1. Leaders with impact are what they know when they do this : Create conditions in which the world can live more amply.
2. Human Resources Development is the most noble errand since teaching.
3. To matter and to make our learning matter : Begin to make new endings.
4. Hope in the future is Power in the present. What can leaders do to deal in Hope?
5. Mark Twain : Kindness is the language that the deaf can hear and the blind can see.
6. Real leaders find their purposes when they are at the very end of themselves.
7. Let us not focus so much on our problems that we become blind to our possibilities.
8. Demanding and insisting on feedback in a culture that has not overcome its power distance is an overbearing insensitivity to our own selves.
9. When designing organisations, scale is to be met with structure. Structure is to be met with commitment and self-discipline. This process cannot be completed on paper and can only begin there.
10. When the CEO is held accountable, all but him or her escape scrutiny in the ravenous scrounge of electronic media. We've externalized our feudal mind-set unwittingly and unconsciously to the self-absorbed journalist and editor.

Dealing with Introverts? - Work through their Unconscious Biases

My English teacher in school S Swamy, was a teacher of norms as well. “Beware of the wrath of a patient man” he would tell fidgety, talkative and restless students. A patient person is often associated with being reserved most of the time, offering little expression even in the face of adversity. In a knowledge economy, harvesting the introverts is the new secret sauce. Those who interact with introverts do not draw them out purposefully. Introverts are a highly misunderstood lot. It is easy to dismiss the challenge by blaming it on them, as if they ‘deserved’ it. While it is true that they earn the consequences of their choicest silences, it does not equate as a sentient justice system on the laws of interaction.
I recollect essaying a treatment of polarities based on Dr. Hogan’s Unconscious Bias scheme. Let me attempt to review these as a dilemma point that the introvert experiences now.
Introverts are often on the cusp of transformation, if not deep into several transformative forces, that those whom they interact with can seldom fathom. The transformative energy resides in desired sense of balance in dysfunctional and opposite ‘cause’ motivations as the ones described above. In order to get better yield out of introverts, here’s my list of guidelines – does not matter what end of the expression spectrum you are – introvert or extrovert.
·         Make a hypothesis. Talk it with the introvert. Lay it for him in chunks that begin with the highest order of statement, followed by its descending components. He/she the introvert will respect your intellect. If you’re off the mark, stop hypothesizing. Reflect on your mistake, and offer your statement of ignorance as authentically as you can. Pause for that near-death silence. Bury your thought, and watch the other’s rise as a phoenix from your ashes. Then patiently watch the shift of energy in the conversation.
·         Empathize with the introvert’s special interests. Place or position statements that entice the internally excited mind to give vent to such thoughts. Draw the conversationalist in the introvert out like you lead a baby to walk – teasingly, and yet, letting the little leading finger go, when the rapport has been confidently struck.
·         Listen when the introvert talks. The intensity of the introvert’s disclosure is a matter to be respected. Fly in the face of adversity you will, if you do not appreciate the passion that flows on the tongue owned by a pent-up mind.
·         If you are not in the habit of reading, discipline your mind to read on the introvert’s areas of interest. Better to strike a liking based on mutual awareness, than to offer a pat during meal time, merely to register an association with someone – in this case the reclusive introvert.
·         Write objectively about your introvert friend. Crisp, clear and concrete descriptions for the laser-logical guy, and a narrative emotional and variously described text for the intuitive introvert. They do not like inefficiency and lack of focus in feedback. They value precision and depth. What is more, they can discern precision from accuracy!
Let me know what you think.
Posted by Joseph George A at 4:02 PM No comments:

On Dealing with Criticism

Today, we practiced confronting and dealing with criticism in our NLP practice group. While I practiced the practitioner role, leading a member through his own issues in dealing with criticism, there were observers amongst us who reflected the process and fed forward to the insights. And one of them at least wished to use a mental mirror to ward off the criticism. His observations were purely auditory and kinesthetic. The magician was raring to go again.

Azeem has blossomed since we first met to a relentless soul using his evolving capabilities to intuit creative ways of engaging clients in his counseling avatar.  I write merely to record that my first blog of Azeem re-framing the structure of magic was no exaggeration. If Milton Erickson were alive to witness Azeem's work, he'd craft new theory and technique to an already multifarious body of neuro-linguistics. All said and done, we revised our understanding of dealing with criticism. Let me recount the major points here.
1. The criticism and the criticizer, both may be known to us.
2. The next integration is when the criticism is known, but not the criticizer.
3. The next integration is when neither the criticism, nor the criticizer is known fully.
4. Self-criticism needs to be dealt with after the above are integrated satisfactorily. Watch for the kinesthetic signals of calm and deep breathing in the body.
5. Future pacing is crucial at every stage above.
6. Self-esteem is useful in dealing with criticism.
7. Self-affirmations can recoup self-esteem. People with low self-esteem normally find it tough to deal with criticism.
8. New behaviors are generated along the way, if the criticism is dealt with effectively.
9. A re-framing of our belief structures is  potentially underway when dealing with criticism.
10. Criticism is often an  expression of anger, communicated irresponsibly. The intent of the criticizer is to deepen his/her relationship with the one being criticized. The magic is in uncovering the positive intent of the criticism. 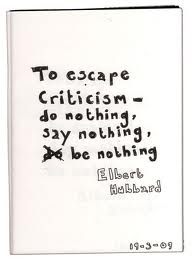 We've the resources required to deal with criticism.  For those who could not accompany us today, here's a small tip. Your criticizer is normally not done with the first expression of irresponsible anger. That release of energy requires a listener. It is for the criticizer to realize his or her folly in not being able to reach you responsibly. Once you pick the signal, you activate the convex mirror to ward off or block the criticism.
Hold a figurative convex mirror where the lens protrudes onto your criticizer, and you see yourself in the mirror within. This visualization should be a strong one. Imagine a hand you shape as a cup with palm facing you to know the direction of the mirror surface. Whatever the criticizer says, no reaction is required as you visualize yourself growing from strength to strength in your convex mirror. The criticizer will take responsibility for his or her criticism. Watch that process unfold, and report comments here if you feel like it.
As I write, a friend just called in to say, how, in early childhood at age 12, his mother said that the criticizer's comments cannot even harm his skin! What he feels within himself is in his own control. Champion parent, solid friend.  Maturity is marked in re-framing criticism as a feed-forward communication to nurture potential in others. That is the hallmark of developmental success, no matter what age the learner is at.
Posted by Joseph George A at 8:56 AM 1 comment: