Of Leaders and Writing - in memory of Ranjan, the Acharya

I dreamed of being a writer once. A passionate journalist, at that. My former boss, the departed Ranjan Acharya compared my motivations to write to that of Fabian socialists. Ranjan himself acknowledged the influence of two great people in his life as far as his own writing was concerned. And he used their tips as cannon for the writing fodder. One of them was the Principal Fr. Mascarenhas of the St. Joseph's Boys' High School in Khadki, Pune, where Ranjan schooled. "Break your essay down into simple points" was Ranjan's  fondest recall of Fr. Mascarenhas.  The other was Mulk_Raj_Anand, a socialist himself. Ranjan would take the local train to Lonavla to soak lessons from him in the art of short story writing.  Ranjan would attempt writing in house journals of the Rotract Club, Pune and get reviews on such writing. Mulk Raj Anand was a tough critic. He still got my boss's respect.

Ranjan's other influences in writing were not so live in the flesh for him; literary giants they surely were. One was PG Wodehouse. And, as it struck me last evening, on a walk with my son, that JK Rowling's travails were not lost on Ranjan's soul. His identification with that writer's struggle and the portrayal of the dark side of life, a premonition of sorts of his moods. When I met Ranjan I was less of a writer than a seeker of understanding of human behavior at work. For what I knew then, an entertainer as Ranjan, could easily camouflage his sorrows. Harry Potter the magician released that spirit of thrill with life, and Ranjan admired Rowling for that ability. He had a magic with words himself, whether spoken or written.

Ranjan got the essence of brevity and humor from Wodehouse and the rivets of a plot from Agatha Christie's characterization of Hercules Poirot. From Rowling, Somerset Maugham, Viktor Frankl and Joseph Heller, Ranjan got the engulfment of mood. If you've wondered, numbers, sounds and even odors could trigger a visual sensation of color for some of us. Hear a drum beat in a march, and you may visualize the color blue. Think of time, and it may be ordered as a deck of domino cards placed infinitely in multi-dimensional space. Such are imaginations that are described as synesthesia. Most creative people experience such sensations. People who experience such cross-sensory perceptions are called synesthetes.

As synesthetes do, Ranjan evoked emotionality from music too. From the Hindustani raga, the eccentric RD Burman to the melodrama of ghazals there was a range he related to that I could not comprehend. Yet these sensations gave Ranjan metaphoric symbolism to lead and guide People Capability Measurement assessments. His access to those nuances, the clarity of those sub-modalities, were clearly his strength. I write today, two years after his untimely demise.

My inspirations came from those who read news on BBC World Service Radio in the 1980s. I had a copy of BBC London Calling as a prelude to what I could tune into. Their diction and flawless flow clearly for me was the virtue of command over language. When in school, Edgar Rice Burroughs (remember Tarzan) had as much effect on me as Gerald Durrel (remember squirrels and mongoose?)  I would see classmates quarrel fiercely over their favorite inspirations of nature, that I vowed never to be victim of such ruthless identification.

I took to reading of the real world. In newspapers of heyday, there was not much to choose from. So I chose writers who had more solemn influence. These included S Nihal Singh and Kiran Thakur. Some writers like Khushwant Singh and Sumant Moolgaonkar would mature like wine. I also fondly remember Abel David of the Poona Herald to have had similar effect. Behram Contractor, the busy-bee and the God of moderation Russi Karanjia in Mumbai were worth observing from their own points of view. Wish someone archives these pre-internet works of journalism for us on the net.

Then came along Chidannand Rajghatta whose place Abhay Vaidya took for a while, as the Times of India correspondent in Washington. Abhay was goaded by Prakash Nair, my cousin's tenant and employee of The Indian Post to mentor me. Abhay still remembers me as a student of Sociology who was advised to take admission to the Tata Institute of Social Sciences than give up that well earned seat for the 'cause' of journalism. Or was it Fabian Socialism that I turned away from? John Scherer the once Lutheran priest reminds me these days that it is never too late to become what I may have been. Choices have their way of churning my insides, I should say.

Today, many tweets have passed me by on the shortest of definitions. Leaders lead. Writers write. And do writers lead? Or do leaders write?  Are these not requisite questions?

As Akio Morita once wrote "I see what I know, when I read what I write". Simple, and yet so profound, the typical Japanese sophistry and understatement shine through. Leaders are humble doers too. Journalists as Abhay were taught that early maxim. His blogs and writing are a testimony to such literary modesty. And curiously a mix of the East and the West?


Leaders, like writers cannot however live to pretend that they can be safe in glass houses. They embrace reality as vulnerably as fish in a fish-bowl.  Leaders live to be themselves, stoked by their inner sense of freedom to be their autonomous selves. They live to be seen, and being seen they endear others to them. Writers too are opinion makers.Their expressions have an inverse projection from their readership. They first connect in fantasy, and in that image, avail their style and identity with their readership through their writing.

As a tribute to Ranjan, and the spirit of writing, here's a link I invite you to read What do you think? Are writers more powerful than we think they are? Are leaders more influential than writers? What could leaders do with writing? What could writers do through leading?
Posted by Joseph George A at 5:22 AM 5 comments:

Five Questions you will see life in

I recently wrote a blog http://www.energizeengage.com/profiles/blogs/model-organisation on implications of designing for organizational effectiveness. It was a nascent attempt to know how readers may take to the blog space for such a topic. At least two senior professionals in my field of passion, who’ve spent more years reading organizations than blogs thought it was a decent attempt. One of them, Terrence Seamon wrote that it may also imply if people from the field of Organisation Development ask enough questions. Do we ask enough questions irrespective of field we come from? My thought streams began this way, until I realized that it is after a certain point of quantity that the questions we ask would become questions of pertinence. Questions that are pertinent and persistent are the most powerful ones. I bring you a book review about questions that fall in that sweet spot between pertinence and persistence. The book is “Five Questions That Change Everything – Life Lessons at Work” by John J. Scherer (Bibliocast, 2009). 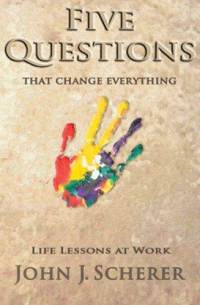