Team Roles - Which of the 9 Lives do you prefer?

Thought some of you may not know about Dr. Meredith Belbin. Dr. Belbin has been more known for his contribution to Team Role theory than he has been known as someone who was asked to study the effects of the computer on humans at work. Here's my take on Belbin’s Team Roles. 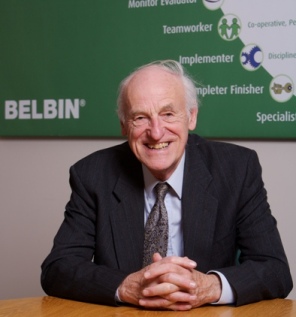 Team roles describe patterns of behavior that characterize a person’s behavior in relationship to another's when in team process. Functional roles refer to the role of an individual in terms of the general technical demands on the person's formal position and - the knowledge and experience that it requires. Most people enter their jobs on the basis of the functional demands and only learn about the importance of team roles later. Remember people are hired for what they do (and often fired for who they are)!
Roles themselves are significant for people to understand their work situation or their social situation, as they create the patterns of behavior that give shape to the wider mosaic of interaction at work. Team roles are valued because they contribute to the effectiveness of the team. The functional role is often implied by the job title. In every day terms the functional role embraces a professional role; often more than that – it will have to cover all the work that needs to be done, at least the important bits.
Most jobs are drawn up with reference points that are largely internal. Yet, no person at work is an island. There will be interfaces with other people who are sure to present problems. Long established employees will have different concerns as compared to an unwary new comer. It is common practice for the professional to be expected to work with colleagues from other backgrounds when some important issues arrive. That is why an understanding of team roles play such an important part in enabling professionals to align with others.
In a very small team the focus falls more on the individuals and their working relationships than the work itself. Effectiveness in performing the work is closely related to how they get on with one another. This simple position may serve as a good starting point. However, the fundamentals of team roles emerged after a long period of research at conducted in conjunction with the Industrial Training Research Unit at . Dr. Meredith Belbin is one of the original ‘gurus’ in this effort. In his early writing on Management Teams, he reported some unexpectedly poor results with teams formed of people who had sharp, analytical minds and high mental ability – he called this the Apollo Syndrome.
His criteria for selecting these teams have elements in common with criteria for selecting staff – using ability and aptitude tests to select those with high analytical skills. The initial perception of Belbin’s Apollo teams was that they were bound to win in the team competitions. However, the results were quite the reverse, and the Apollo teams often finished near the bottom of eight teams.
This failure seemed to be due to certain flaws in the way the team operated:
·         They spent excessive time in abortive or destructive debate, trying to persuade other team members to adopt their own view, and in demonstrating a flair for spotting weaknesses in others’ arguments.
·         They had difficulties in their decision making; with little coherence in the decisions reached (several pressing and necessary jobs were often omitted).
·         Team members tended to act along their own favorite lines without taking account of what fellow members were doing, and the team proved difficult to manage.
·         In some instances, teams recognized what was happening but over compensated they avoided confrontation, which equally led to problems in decision making. 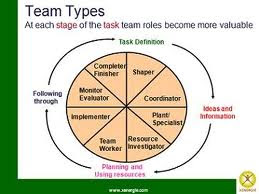 There were successful Apollo teams, however, that were characterized by
·         The absence of highly dominant individuals, and
·         A particular style of leadership
Successful leaders focused attention on the setting of objectives and priorities, and shaping the way team effort was applied. Rather than ‘drawing out’ team members, the successful leaders were tough, discriminating people who could both hold their ground in any company, yet not dominate the group.
A key lesson from Belbin’s work is that putting together a team of the cleverest individuals does not necessarily produce the best results, and the team needs to be designed to ensure that there is a blend of team roles. The fact that a forecast could be offered with a measure of success made for an understanding of the processes underlying effective team work. There are only limited number of ways in which people can usefully contribute in executive team work.
1.    coordinating the team’s efforts,

Hence each team member could be described in terms of their team role contribution patterns. Individuals varied greatly in their patterns. What was observed, was that individuals who are outstanding in one team role were often weak in another. This issue gained central importance in combining certain people with others. Complementary combinations of people proved to be far more effective in their working performance than people with similar profiles competing with each other. In workshops, we deal with the nine Team roles from this line of work done by Dr. Belbin.

And, oh, by the way, I am accredited by Belbin Associates to help you with Team Roles understanding. I've used this often for team designs and interventions in ongoing team efforts. My client teams included CEOs and Business Unit leaders, where the dynamics are quite high-strung. As my former boss put it once "It is like a tiger asking you to count it's teeth. There's little guarantee of getting your hand back from it's mouth"...  I'm telling the real tale!
Posted by Unknown at 4:22 PM