If you have lived through the time of the Wall mania of the Pink Floyd, then you’ve probably heard Roger Waters go solo later in life. He made that choice. In the concept album Amused to Death, Roger penned this amazing lyric for the tile “It’s a miracle” –

“By the grace of God Almighty
And pressures of marketplace
The human race has civilized itself
It's a miracle
We've got warehouses of butter
We've got oceans of wine
We've got famine when we need it
We’ve Got designer crime
We've got Mercedes, We've got Porsche
Ferrari and Rolls Royce,
We've got choice..”

It is not easy to describe the thin line that separates decision making from choice. When you read the lines above, you probably realize how from almost 2 decades ago, the wisdom of the poet singers descended down the ages. Contemporary to that music was National Geographic’s famous 3-D holographic cover of our stressed planet and CK Prahlad’s exhortation to stick to the knitting in terms of corporate strategy. Today, corporations that vend their wares need to reckon with their impact on sustainability and triple bottom-line accounting methods. How did we ever end up making those choices? Who would you expect to break ground on such thinking? Would it be Daniel Kanhemann, the Nobel Laureate with his heuristics that explains bias in decision making? Or would it be the confluence between efficacy and challenge to be in the state of flow?
Well, challenges she overcame indeed, and her efficacy is now endorsed by famed journalists Atul Gawande and Malcolm Gladwell. Sheena Iyengar’s dissertation in 1993 “Choice and its Discontents,” asks the question: are there circumstances in which people are better off when they have their choices limited or entirely removed? She received the prestigious Best Dissertation Award for 1998 from the Society of Experimental Social Psychology. Undeterred by an inherited disease of retinal degeneration, and her visually challenging life, she has brought her learning and insight to our lives in her book “The Art of Choosing” (2010), published by Little Brown UK, and also available as an electronic book in audio form.
In early depiction of her work on choice, she was known to be derided by people from Rush Limbaugh to McKinsey consultants – from airports to social events, for her rather hard-boned grit in offering choices in experimentation at popular marketplaces. Take a mundane question: Do you choose to brush your teeth in the morning? Or do you just do it? Can a habit or custom be a choice? When Iyengar asked Japanese and American college students in Kyoto to record all the choices they made in a day, the Americans included things like brushing their teeth and hitting the snooze button. The Japanese didn’t consider those actions to be choices. The two groups lived similar lives. But they defined them differently.
Sheena’s book is fascinating not only because of her narratives of choice, but also for the way she has it unfold. Autobiographical and personal at one level, it takes a reader right into her world, and then slips smoothly into our skin to explore dimensions of choice in social informal settings, performance on the job, cross-cultural behavior differentiation, stress, judgment and decision-making, perception, intergenerational diversity, cognitive dissonance, happiness, conscious and unconscious intelligence, self-referential predictions, medicine, neural representation of thought, attitude, culture and history.
At another level, such sagacity is balanced with a story telling persuasion that makes it easily a style reminiscent of Carl Sagan who popularized science through his writings of the Cosmos. Here’s a sample from page 72, “One civilization can no longer fully consume another, and it also cannot set up a giant barrier to keep the other out. Tolerance and respect don’t cut the mustard, either, especially not when deeply held beliefs and lives are at stake. So we seem to be at an impasse, thinking we have little to share and no clear way to move forward. But there is common ground, though it may sometimes seem to be no-man’s land. At the broadest level, it’s unquestionable that the basic values of life liberty, and the pursuit of happiness truly are common to people around the globe. Indeed,..we have a biological need for choice and control.. ” …..and then page 73 “I can’t offer a 3-step plan, or even a 30 step plan, for how to reach whatever it is that comes after tolerance. But I know we cannot live solely by our own stories or assume that the stories we live by are the only ones that exist.” I am left wondering therefore, if such perspicacity could have dawned on one more gifted by eyesight and multi-sensory perception.
Sheena admits that one book cannot contain the fullness of the art of choosing. Yet, she leaves us with provocative thoughts about ourselves and others whom we impact through our choices. Her seven chapters and sub-chapters therein are clearly a vantage point that is uncommon in its field of enquiry and its depiction. 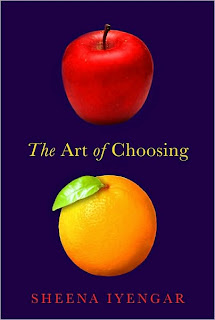 Her mark of tolerance leaves the reader to imagine how life itself may unfold. Her choice in such a style is to uphold values that led to her own insights. Such gregariousness is surely a gift of the scientific temperament. It also tells in the variety of methods science uses to uncover truths. Some of her findings come from positivist survey methodology, and some from qualitatively ethnocentric case studies. She cleverly and at times, teasingly engages our attention, as she legitimizes her grip of the knowledge she is passionate about with evidence from her studies across the globe. Her trials and triumphs in engaging with people from her personal and professional worlds are impressive to say the least. Convincing and perceptually wealthy, this book is not a passing fad like some of its apparent predecessors; but a classic that will brew its magic as time passes us by. And if I were to add another dimension to this review, do recommend this book as a role model feat to those who are challenged in life. This monumental labor from Sheena Iyengar could not have culminated without love and grace. Pass it on.
Posted by Joseph George A at 2:05 AM